*Within 8 months of this year, Cambodia exported dozens of tons of cassava and cassava waste to abroad markets  *Meanchey Authorities warned to implement measures on truck that overflow sand on the road  *141 of the monks and the people living in pagodas found positive with Covid-19  *Take action on people without helmets and masks  *Kim Chou Guava plantations in Saang district tastes delicious and gaining customer support  *People still have 3 days off during the upcoming Pchum Ben festival, but must adhere to implement health measures  *Outcomes Of Virtual ASEAN-U.S. Foreign Ministers’ Meeting Released  *7,000 hectares of agricultural land in Banteay Meanchey province flooded by rain  *Boryakha Waterfall Resort in Pailin Province is an interesting place  *PM Calls For Understanding Over Suspension Of Kan Ben And Pchum Ben

Brotzeit German Beerhouse's Oktoberfest, the beer festival, kicked off on Monday in Beijing. The restaurant chain is bringing out a special and unique Oktoberfest IPA for the celebration, as well as a special menu. Oktoberfest IPA is made according to Germany's "Reinheitsgebot" pure beer brewing rules, which decree that beer must be made with only barley malt, water, hops, and yeast. 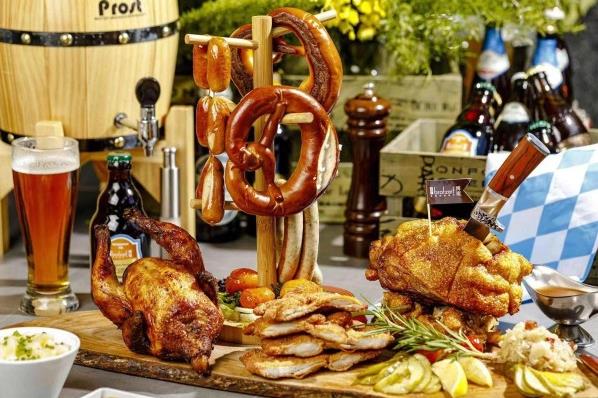 The XXXL pretzel pork knuckle sandwich is the must-try. The salty, savory pretzel has been expanded to a large size and cooked until the skin reaches the perfect firmness and is sprinkled with salt crystals. Filled with crackling pork knuckle skin, cabbage salad, pickles, and mustard, the satisfying combo is a treat to Beijing dinners.

The Oktoberfest party platter is one highlight - apart from the crackling pork knuckle and beer smoke-roasted chicken. The other culinary stars of this platter include Viennese chicken schnitzel and German sausage bread racks, paired with potato salad and sauerkraut. The beer festival will last till the end of October.

Luxury in the lap of wildness